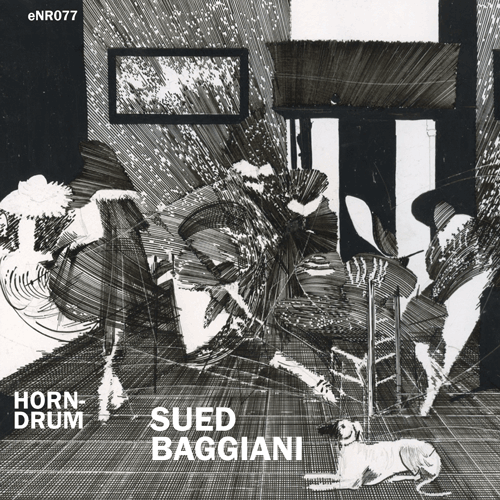 An ‘out of the ordinary’ sax-and-drums duo.
Their musical approach stems from an encyclopaedic study of Jazz and Improvisation as well as classical composition and post-classical techniques. This information is brewed within the roots of Argentinean and Latin American culture. Their way into sound is a revered path bound to their devoted musical dedication.

Horn - Drum is a multi-dimensional work of music written with confidence on the blank paper of silence.
It’s a bless to hear this Argentinian tandem, that has served the music of so many groups and projects in the Amsterdam scene over the years, like this: naked in duo. No piano’s, or guitars, no theater play, no singers, no dancers, no repertoire of other composers; nothing to color their music. Here it’s served to the listener aesthetically pure: Horn Drum.
And yet this is the music of two artist that have emerged themselves into so many artistic situations that the language they speak when improvising is that of the interdisciplinary artist. It’s a language in which the artists are always both independent and together. How natural it would be to relate to all of the music on this record being a dancer, painter or film maker, sharing what characterizes this duo: structure, consequence, choice, counterpoint, interplay, depth.
Improvised music is music in the moment. But the music on this disc is also true instant composition. Baggiani and Sued are as much in the moment, as they are above it; working with the consequence the material implies as it’s being created in all it’s different facets. This is a duet, but the number of dimensions in the music are always more than two. Drummer and saxophonist share the responsibility for the overall horizontal structure created in time. At the same time the ever-present counterpoint between the music of the two players, gives this art its beautiful vertical depth. The presence and rich body of the saxophone and percussion sounds bring the music towards you. It is both immediate and in duration.

The opening piece Lip - Stick and its twin composition Horn - Drum bring us, right from the start, to the core of this record: A wonderful place at the crossroad of rhythm and pitch on their shared common ground in sound.

The independent togetherness of the duo’s approach to improvising manifests itself also right from the first number on the record. Baggiani continues his opening story on percussion, without even raising an eyebrow, when the saxophone of Sued enters the room in strong counterpoint. Yet they are together strongly and completely. Sueds signature way of structuring a pitched based story draws the attention. He is a master at independently developing different cells within one composition, to later relate them to each other. A classic thesis-antithesis-synthesis approach with a strong sense of the large-scale melodic contour. The lowest and highest points in the melody are chosen very convincingly, at points moved further or closer in distance, and eventually brought into dialogue with each other and material in the middle voices.

Waynu shows that with Sued and Baggiani sound exploration and the use of a wide spectrum of sonorities is a totally integrated part of the pitch rhythm-based work.

In Circular Playing music is like talking. Here Baggiani shows his percussion can speak and phrase like any pitch-based instrument. It’s a splendid conversation indeed.

Memorias Del Futuro, memories of the future, is just a perfect title: This improvisation is a great example of music that is as much in the moment, as above the moment in a field of duration.

Origen is like an inside out classical sonata form: exposition, development, recapitulation. Improvised music conventions have it a theme is followed by exploration in sound. In Origen the exposition is a sonic exploration, the development a small pitch rhythm-based theme only to be recapitulated by the world of sound.

On Bijna Song Sued rapidly speeds by a dozen jazz languages including the world of Tristano and Sal Mosca (with whom Sued studied in the U.S.) not just quoting or referencing them but actually mastering them. And like with all true masters, this package of skill is not there to impress. It’s always there in service of the music.

Ritual is taking the music to a level of sonority in space. The room is becoming a third player in the band. Overtones blend, the horn is performed as a sonic cone, resonating air from the lungs to the walls of the room. Baggiani shows himself as a true master of the pitch in his percussion. Not many people can blend, small sounds and timbres so precise. Blending of sounds often means throwing a bucket of sustain in a big pan of sound soup. Baggiani is like a spider blender very strong with the smallest threat. Even when projected in this naked duo setting, with only one other player in the room, he finds the resonance spot that works the room and lets the music breed in our ear.

Game on in Dialoog. We go from call and response agreement to a multidimensional story of two different perspectives expressed simultaneously. A conversation speeding up as it crossfades from horizontal to vertical counterpoint.

The journey of Horn and Drums ends like the day ends; with a nocturne El Misterio De La Noche. Pure music in pure duo. Pure beauty.